The Empress is the 3rd Major Arcana Card of the Tarot – and being Tarot Card #3 means that it’s archetypal theme supports our navigation of a Universal ‘3’ Year in Numerology.

The Empress Tarot Card Description. The Empress depicts a woman sitting on a throne. From the abundant nature that surrounds her, we can assume that this woman represents the Earth Mother archetype, a goddess of fertility. … The Empress brings abundance and blessings in the readings of those she meets.

Two other Major Arcana Cards will also come into play during 2019:

The Hanged Man (XII) is the twelfth trump or Major Arcana card in most traditional Tarot decks. … The Hanged Man card is a strong message from the universe that the option of surrendering is always open to you. It might, in fact, be the quickest way to a complete and total victory. You have reached a crossroads, making it possible to clear the slate and start over.

The World represents an ending to a cycle of life, a pause in life before the next big cycle beginning with the fool. It is an indicator of a major and inexorable change, of tectonic breadth. When the World card appears in a Tarot reading, you are glowing with a sense of wholeness, achievement, fulfillment and completion. … This card could represent graduation, a marriage, the birth of a child or achieving a long-held dream or aspiration. 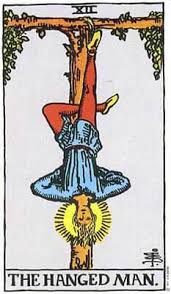