Here We Go ! Mercury Retrograde from March 5th – 28th. March comes with 2019’s first Mercury retrograde, occurring entirely in Pisces and starting at 29 degrees, which is a point of crisis energy. Mercury retrograde begins on March 5th at 2:18 PM ET and ends on March 28th at 9:58 AM ET. The shadow period is February 19th – April 16th. The first storm period is March 1st – 10th, and second storm period is March 22nd – April 6th.

We may find ourselves getting stuck in a fog pretty easily, which can make it hard to make decisions, to think clearly, and to focus. We can be more easily misled, delude ourselves or are deceived by others, and can be easily manipulated. We may wander around, flowing from this to that, seemingly directionless. It becomes important with Pisces energy to make sure we’re grounded and to be as realistic as possible, otherwise we can find ourselves with a lot of issues!

We may be more easily rundown, constantly tired, and the world may be a bit sluggish as the more dominating among us become more demanding and draining on our energy. We need to make time for rest and quiet time alone so we can recharge, otherwise we just keep getting drained until we’re dry. Healthy boundaries are always important with Pisces.

Spirituality and intuition fall under the domain of Pisces, and we may be more focused on spiritual needs. It can be a good time to tend to them, but we need to make sure we don’t get too lost in them and lack an open mind and accepting heart. Intuition can be helpful for guidance since focus may be lacking, but we need to work on truly listening to our inner guides and not just believing what we want to believe.

Pisces is the last sign of the Zodiac, so we may be focused on something that needs to come to an end. We may encounter resistance, blocks, issues as we try to finish, close out, or let go, whether internal or external, and we may need to make sure we’re eliminating from the root and not just on the surface so it doesn’t come back again. Something we thought we were done with and wouldn’t have to deal with again could come back, rearing its ugly head, and we have to make sure we really take care of it this time.

It’s going to feel like things we thought were going to be over are going to come roaring back from the dead! We’re all going to need a lot of time to rest, need to be a lot sweeter to one another. Some may be cruel, but dump that and be compassionate. At the same time, we need some healthy boundaries, otherwise we can be vulnerable to deception and manipulation, especially around the end of the retrograde (which is conjunct Neptune, natural ruler of Pisces).

Pisces are very friendly, so they often find themselves in a company of very different people. … Pisces is a Water sign and as such this zodiac sign is characterized by empathy and expressed emotional capacity. Their ruling planet is Neptune, so Pisces are more intuitive than others and have an artistic talent.

Intuitive, Empathic and this sign brings together many of the characteristics of the eleven signs that have come before it. Mercury in retrograde is a time when you’re meant to take a deep breath and catch up with projects or things you have going on. It can feel a little emotionally overwhelming, but it’s nothing you can’t handle.

Still, this Mercury in retrograde is happening in Pisces, and that can create a little bit of a “woe is me” feeling. There’s a bit of tendency to stop and ask, ‘am I getting what I want out of life? Is this or that working for me?

When Mercury Retrogrades in Your Sun, Moon, or Rising Sign this can have a general impact on you while Mercury is retrograde in that sign. The Sun and 1st house rule you and the Moon rules your emotions, so you can feel really, really off when Mercury is retrograde in your Sun sign, Moon sign, or 1st house, even if it doesn’t conjunct your Sun, Moon, or 1st house cusp. It can be a feeling of, if it can go wrong, it does wrong, and you have to be extra patient with both yourself and others.

It’s generally not a good time for starting anything new, but it can be a great time for second chances. That’s usually the best way to use the energy, to take a second chance with something, give it another try, and redo something. All of the Mercury retrograde re-‘s can be great to focus on. And since it’s in your sign, you’re not as restricted with what you can take another chance with. It’s pretty much whatever you want!

The day after Mercury retrograde starts, on the 6th, Uranus moves into Taurus to stay for the next almost-decade. So there’s some big movement happening around then! We’re in hot energy right now with Uranus anaretic in Aries, and loose ends have to be tied up, we have to start and finish quickly while we have the chance, and with Uranus in Taurus, we can focus on a whole new shift, a whole new phase, a whole new decade of life.

Venus enters Aquarius on the 1st, and we can think about the future, enjoy being with friends, and want more independence. We can be open to change, and shaking things up in relationships. Venus moves into Pisces on the 26th, at the end of the Mercury retrograde, and tries to help us come out of the retrograde with greater sensitivity, compassion, intuition, and spirituality.

The Sun enters Aries on the 20th, and we can have more energy, more drive, more enthusiasm, and want to take initiative and make things happen. On the same day, there’s a full moon in Libra at a critical degree, and there may be important developments in relationships, commitments, and compromises. Energy may be high, and we need to keep calm and remain focused.

Mars closes the month out entering Gemini on the 31st, and mental energy surges, we focus on new ideas and new plans, and get excited by what we can come up with. We can work to make ideas tangible, and pursue opportunities to act on plans. 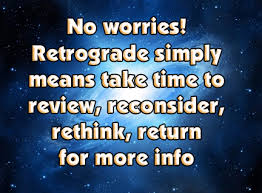 AND MORE GOING ON MARCH 5. SEE BELOW.